One of the most complicated areas in the iGCSE course is looking at how organisms can be genetically modified.  Remember that humans have been messing around with the genetic composition of many species for thousands of years.  Up until recently this has only been using a technique called selective breeding or artificial selection.

Make sure you understand exactly what is meant by the term selective breeding?  You probably should be able to explain at least one example in both an animal and a plant species.

In the twentieth century scientists developed a much more precise way of genetically modifying a species.  This was due to discoveries about the nature of the genetic code and also the existence of two types of enzyme that make cutting up and then sticking together pieces of DNA.  This new technique was called genetic engineering and it has two big advantages over selective breeding.  Firstly genes from different species can be recombined to form transgenic organisms.  Transgenic is an important term and means an organism that contains DNA from more than one species.  This means scientists are not restricted to alleles present in the natural population but can insert genes from any species into any other.  Secondly, selective breeding has a big disadvantage in that it can reduce the allelic diversity in a population. If the population becomes more and more similar at a genetic level, this means that inbreeding becomes more of a problem and the population becomes susceptible to damage from changes in the environment.

You need to understand the role of two enzymes in the process of Genetic Engineering:

Restriction Enzymes are found in bacteria and have evolved to combat viral infection in the bacterial cell.  These enzymes can cut double-stranded DNA at a specific target sequence, often leaving the ends of the DNA with short sections of unpaired bases.  These are called sticky ends.

The image below shows the cutting site of a restriction enzyme called EcoR1.  You can see the enzyme cuts the DNA anywhere the following sequence is found GAATTC.  The DNA molecule is cut after the first G, leaving the two strands with four unpaired bases that make up the two sticky ends.

Here are some more restriction enzymes and there target sequences.  The bottom three on the list all produce sticky ends.

The second important enzyme for genetic engineering is DNA Ligase.  This enzyme catalyses the joining together of the sticky ends of two fragments to produce an intact DNA molecule. 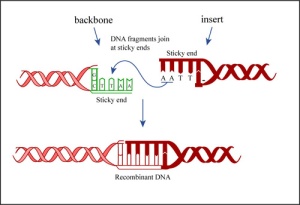