Most of the work you do on transport in plants concerns the movement of water and minerals from the roots to the leaves of the plants in xylem vessels.  (see previous post on xylem transport)  You should understand what transpiration is, and how the properties of water allow a transpiration pull provide the energy to move large volumes of water up the xylem in the plant.

But what about the second plant transport tissue phloem?  How does it differ from xylem in both structure and function?

What is transported in phloem sieve tubes?

Plants transport the products of photosynthesis (food molecules) up and down the stem in phloem.  The main carbohydrate transported is sucrose but phloem cells also contain lots of amino acids and a few other sugars.

The mechanism by which these sugars are moved around the plant is less well understood than for water movement in xylem.  Translocation is an active process and requires energy from respiration in the cells.  It is possible that a bulk flow exists as shown in the diagram below, but this mechanism cannot be the whole story…..  Can you think why?  Post a comment if you want to explain some of the difficulties with this theory….. 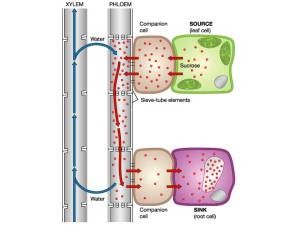 A great reminder of how difficult it must be for a tree to move water up xylem vessels to such a great height. Plant biology is always way more complex and confusing than you would think.

I have had a request from a student to write about the level of details needed in the section of the specification on human transport.  Here are the relevant bullet points from the specification, together with a very brief outline of the kinds of details to learn:

The two sections that are perhaps hardest to interpret are the ones on vaccination and the general plan of the circulation.

At the end of the process, you should be able to provide a clear concise answer to the following question?

Why is it that the first time your body encounters measles virus, you suffer from the disease measles?  Why will someone who has had measles as a baby (or been immunised against it) never contract the disease measles even though the virus might get into their body many subsequent times?

2) The blood vessels involved in the four organs mentioned are described below.

Heart – receives blood from the coronary arteries which branch off the aorta before it has even left the heart:  Why doesn’t the cardiac muscle in the heart just get the oxygen and nutrients it needs from the blood in the chambers?

Lungs – pulmonary artery takes blood from right ventricle to the lungs, pulmonary vein return oxygenated blood to the heart and empty it into the left atrium.  What is unique about the composition of the blood in the pulmonary artery?

Liver – has a most unusual blood supply.  There is  a hepatic artery that branches off the aorta and brings oxygenated blood to the liver.  Blood also goes to the liver in the hepatic portal vein which brings blood from the small intestine.  Blood in the hepatic portal vein will contain lots of dissolved glucose and amino acids, both of which are processed in the liver.  Deoxygenated blood leaves the liver in the hepatic vein.  Find a diagram to show the arrangement of these three blood vessels.

Kidney – straightforward blood supply in that there is a renal artery and a renal vein.  (important idea is that the renal artery is much much bigger than you would expect from the size of the organs:  25% of the cardiac output of blood flows through the kidneys on each circuit)  Why do you think this is?

I hope this helps – more to follow when I get home from my holidays tomorrow afternoon…..