The previous post looked at the structure and function of red blood cells and plasma.  Now it is time to turn our attention to the rather more complex topic of white blood cells…..  This is a topic in which the complexity can put people off but I am deliberately going to keep things simple (I hope!).  If you are thinking about revision for GCSE, don’t worry about anything more complicated than in this post.

There are many types of white blood cell found in blood.  But let’s keep things simple….  You need to understand the role of lymphocytes and phagocytes in defending the body against pathogens.

A pathogen is defined as “a microorganism that can cause a disease” and pathogens may be bacteria, viruses, protistans or fungi.  Can you give me an example of an infectious disease caused by each class of pathogen?

The structure of these two classes of white blood cell is important.  The commonest phagocytes in blood are called neutrophils and they are easily recognised by their irregular shaped nucleus and cytoplasm packed full of granules.  Lymphocytes are much smaller white cells and are identifiable by their clear cytoplasm and large spherical nucleus that takes up 90% of the volume of the cell. 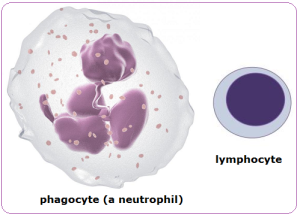 So now we should look at how these two types of white blood cells defend the body against pathogens.  Remember that the account on this post is an over-simplification of what is in reality an extremely complex process.

Let’s start with a phagocyte.  These large cells are able to engulf invading pathogens in the blood and tissue fluid by a process called phagocytosis.

The problem for phagocytes is this:  how do they know what to engulf and destroy?  This is where lymphocytes come in.  One class of lymphocyte is able to secrete small soluble proteins called antibodies into the blood.  Antibodies are specific to a particular surface marker on the invading pathogen and bind to it because the shape of the antibody and the shape of the surface marker are complimentary.

Now people always get confused between antibodies (the small soluble Y-shaped proteins secreted by lymphocytes) and antigens (the surface markers on the invading pathogen).  Make sure you are completely clear on the difference in meaning of these two words…. 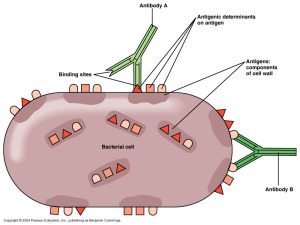 Antibodies produced by lymphocytes will coat the invading pathogen by binding to antigens on its surface.  One effect of this is that phagocytes are stimulated to engulf the antibody-coated organism.

There are many different types of lymphocyte and not all can produce antibodies.  Another important function of lymphocytes is to kill your own body cells when they are corrupted, either by the presence of a virus or by becoming cancerous.

Finally, can I draw your attention to two previous posts linked to this one.  The first is on the role of platelets in blood clotting, the second on the difficult topic of immunity and how lymphocytes are responsible for giving you lifelong protection against certain infectious diseases.

As always, please ask me questions either via the comment section below the post or with a tweet…. I will do my best to respond to any questions from anyone who is bothered to read my posts!

The most complicated topic in the human transport topic is certainly immunisation.  In a previous post, I said you should be able to answer the following two questions:

Why is it that the first time your body encounters measles virus, you suffer from the disease measles?  Why will someone who has had measles as a baby (or been immunised against it) never contract the disease measles even though the virus might get into their body many subsequent times?

I thought in this post I should attempt to expand a little so as to provide answers to these two important questions. This understanding is quite complex for IGCSE but you cannot really see how immunity works unless you can work through each stage in the process.

Let’s pretend you are a new born baby and you get measles virus particles into your bloodstream from contact with an infected person.  Remember viruses are not living organisms as they are not made of cells and have no metabolism.  All they are is a tiny particle made of DNA (genetic material) surrounded by a protein coat.

Look up a picture showing the structure of a virus particle in Google.  This one comes from science learn.org.nz 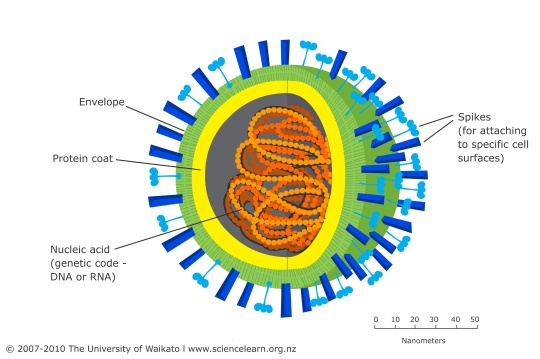 The “spikes” on the surface of the virus particle are proteins that are essential to allow the virus to get inside a host cell.  But they can also act as antigens allowing the immune system to recognise the virus as a foreign object and so mount an immune response to it.

In the body there are hundreds of billions of white blood cells called B lymphocytes.  Each B lymphocyte is able to divide by mitosis over and over again to form a clone of cells called plasma cells.  These plasma cells secrete a type of protein called an antibody which has a shape specific to the shape of the antigen such that it can bind to the antigen and neutralise it.  (Can you think of another example in the specification where the shape of a protein is essential to its function?)

Now here is the first key piece of information needed in understanding immunity. Each B lymphocyte is only able to produce an antibody molecule with one particular shape.  So the reason you need hundreds of billions of lymphocytes is to be able to produce antibodies that have the correct shape to combat hundreds of billions of possible shaped antigens on a lifetime of pathogen exposure.

Go back to your newborn baby exposed to measles virus.  There might be only a handful of B lymphocytes in the babies’ body that just happen to be able to produce a shape of antibody specific to antigens on the surface of the measles virus.  Before any antibodies can be produced, the “correct” B lymphocyte has to come into contact with measles virus particles and be activated.  It then has to divide many times by mitosis to form a clone of plasma cells and the plasma cells have to differentiate and start producing antibodies.  This whole process is called the primary response (first exposure hence primary) and it may take up to 8 days before any antibodies start appearing in the babies’ blood.  What are the measles virus particles doing all this while?  Well they are infecting host cells, damaging them and causing disease.  This is why the baby will suffer from the disease measles.

The second key piece of information for immunity is this:  when the B lymphocyte that has been activated divides by mitosis to form a clone, not all the cells produced form antibody-producing plasma cells.  About 25% of the clone just remain as lymphocytes and are called memory cells.  This is because they are long-lived cells that account for immunological memory.

Let’s pretend the baby gets better from measles due to the antibodies produced in the primary response.  What happens if years later, the child goes to school and meets measles virus again for a second time?  You all know that the child won’t get the disease measles this time.  This is because the immune response is different second time round – the secondary response.  The secondary response to antigen is quicker (no 8 day delay), larger (more antibodies made) and lasts for longer.  This is because in a secondary response there are not just a handful of B lymphocytes in the body capable of making antibodies to combat measles virus.  There are now millions of memory cells left over from the primary response that can all immediately “leap into life” and start making antibodies.  These antibodies will be produced so quickly and in such large numbers that the virus particles will be eliminated before they have time to cause harm and disease.   No harm caused to host cells therefore no disease measles this time round!

Finally, you know that you can have immunity to measles without having had the disease.  This is because everyone in the UK sitting GCSE exams this summer will have been immunised against measles virus as a baby.  You were injected with antigens from the surface of measles virus particles when you were a baby.  These antigens by themselves could not give you measles (why not?) but they did cause a primary response to occur and memory cells to measles antigens be formed.  So now if you do encounter measles virus, your body will mount a secondary response and you won’t get the disease.  #result

When answering questions on this topic in exams, candidates often think that it is the antibodies produced in the primary response that are left over to stop you getting measles later in life. Look at a graph showing primary and secondary responses to antigen such as the one below.

This graph shows how antibody concentration in the blood changes in the primary and secondary immune response.

Antibodies are proteins and you can see they have a half-life in the blood of a few weeks.  (The liver breaks down proteins in the blood as one of its many functions)  So all the antibodies from a primary response will have been removed within a few months of the first exposure. Immunity can last a lifetime and this is because memory cells can survive as long as you do.  Unlike antibodies they can hang around in your blood and lymph nodes for the rest of your life.  If you live to be a hundred, you still won’t catch measles more than once.

This is a tricky topic so do please comment on this post if you have any questions.  Work hard at revision – it will be worth it in the end…..  (At least with Biology revision, it is fascinating stuff isn’t it?)