Viruses appear in your syllabus in a section entitled “Variety of Living Organisms”.  This is rather unfortunate because of course viruses are not classified as living organisms at all.  The reason they are not alive is simple:  they are not made of cells and they are incapable of carrying out any metabolic reactions.  Viruses are much smaller than any cell, even very small prokaryotic cells such as bacteria.

In the diagram above you can see in the top right of the picture part of a red blood cell.  Red blood cells are one of the smaller cells in the human body.  The bacterial cell at the bottom of the diagram E.coli is much smaller, and all the blue viruses are much much smaller still.  [The units of length on this diagram are nanometers (nm) – a nanometer is 10-9 m]

All viruses are parasitic as they have to infect a living cell in order to reproduce.

What are viruses made of?

Well remember viruses are not made of cells.  The individual virus particles are called virions and are simply made up of a protein coat (called a capsid) that encloses some genetic material.  The genetic material in a virion can either be DNA or a similar molecule called RNA.

Viruses can infect all different kinds of living organisms.  The virus on the left in the diagram above is called a bacteriophage and it infects bacterial cells.  You can see the protein coat is arranged into a head, tail and fibres and the genetic material in a bacteriophage is DNA.  The virus on the right is the Influenza virus that infects mammals and birds, causing the disease influenza or “flu”.  Influenza virus is an RNA virus.

Many human diseases are caused by viral pathogens.  Influenza is one (see above) and the other one mentioned in the syllabus is HIV – a virus that causes the diseases AIDS.  HIV is also an RNA virus.  [HIV stands for Human Immunodeficiency Virus and the disease AIDS is acquired immunodeficiency syndrome.]

Some viruses infect and cause disease in plants.  Tobacco Mosaic Virus infects tobacco plants causing yellow leaves as chloroplasts are not formed correctly in the leaves.

This is a diagram of a Tobacco Mosaic Virus

The specification has a section called “Variety of Living Organisms”.  In this section, candidates are asked to learn about the features of the Five Kingdoms of living things and certain examples are mentioned.  This model of grouping organisms states that all living things can be allocated to one of these five groups:

It is disappointing that Viruses are added as a sixth group in this section of the syllabus.  Viruses are not classified as a Kingdom of living things as they are not made of cells and have no metabolism.

Bacteria are small, single celled organisms that are made of a fundamentally different kind of cell to all the other Kingdoms.  Bacterial cells are described as being prokaryotic:  they are smaller than other cells, have no nucleus and no membrane-bound organelles (such as mitochondria or chloroplasts).  Bacteria cells have a cell wall containing a cell membrane but their cell wall does not contain any cellulose.  Instead the bacterial cell wall is made mostly of a molecule called proteoglycan a molecule is only found in bacterial cells.

Bacteria cells contain DNA (all living things use this molecule as their genetic material) but the key idea is that bacterial DNA is not contained inside a nucleus.  Bacterial DNA is in the form of a single circular ring that just floats around in the cytoplasm of the cell.  This circular ring of DNA is sometimes called the bacterial chromosome (but I dislike this term as the DNA molecule in bacteria is not wrapped around a scaffold of protein as in eukaryote cells). Some bacteria contain small additional rings of DNA that are called plasmids.   These plasmids can be transferred from one bacterial cell to another, and can also be used as a vector in genetic engineering. 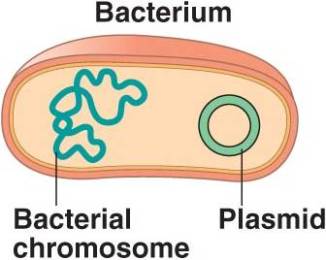 Examples of bacteria mentioned in the specification are Lactobacillus bulgaris a rod–shaped bacterium used in the production of yoghurt and Pneumococcus, a spherical bacterium that is the pathogen that causes the infectious disease pneumonia.

Remember that some bacteria are autotrophic and can carry out photosynthesis but most feed by absorbing material through their cell walls.

Animals by definition are multicellular organisms.  Animal cells do not have a cell wall and do not contain chloroplasts and so cannot photosynthesise.  Animals are often able to move from place to place and have a nervous system.  Animal cells can store carbohydrate in liver and muscle cells in the form of a storage polysaccharide called glycogen.

The examples of animals mentioned in the specification are humans, housefly and mosquito.

The plant kingdom also contains organisms that are multicellular.  In contrast to animals, plant cells do photosynthesise and do contain chloroplasts.  Plant cells have a cell wall made of the polysaccharide cellulose.  Carbohydrates are stored in plant cells in the form of starch and are transported in the phloem as a sugar called sucrose.

Fungi are a group of organisms that include moulds, mushrooms, toadstools and yeasts.  They are made of cells with a cell wall made of chitin and a nucleus.  Fungi do not photosynthesise and do not contain chloroplasts.  They feed by secreting digestive enzymes onto the food material they are living on and then absorbing the products of digestion:  a process called saprotrophic nutrition.  Fungi store carbohydrate in the form of glycogen.

Multicellular fungi such as Mucor are often organised into a mycelium, a mesh of thread-like structures called hyphae.  Each hypha is a structure containing many nuclei.  Some fungi such as the yeasts used in the brewing and baking industries are single-celled. 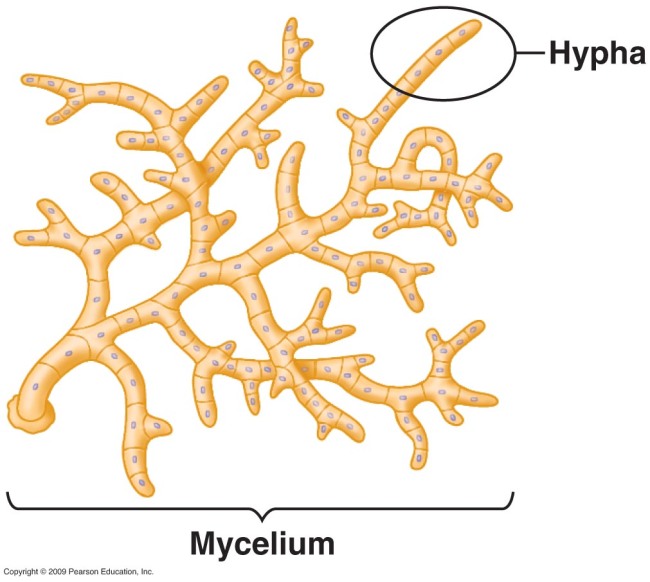 This is the least interesting of the 5 Kingdoms (which is saying something…..)  Protoctists are all single celled organisms but unlike bacteria they are made of eukaryotic cells: cells with a nucleus and organelles like mitochondria and chloroplasts.  Some protoctists like Amoeba share many features with animal cells while others like Chlorella are more plant-like and contain chloroplasts to photosynthesise.  Some protoctists are pathogenic for example Plasmodium, the single celled organism that causes the disease Malaria.

An Amoeba cell on the left and some Chlorella cells on the right.