In the previous post, I described what is meant by a stem cell and how stem cells are formed from the non-specialised cells of the embryo in a process called differentiation.

Stem cells have the potential to be used in a variety of medical treatments.  At present, there are very few diseases for which stem cell treatments are available in the UK but the potential is certainly there for many more in the future. 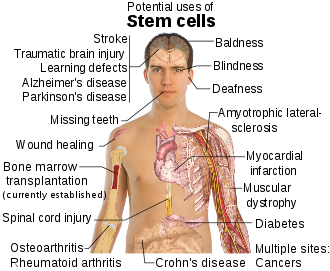 What are the advantages of using stem cells in medicine?

Many diseases in the body are caused by certain groups of cells dying prematurely.  For example Parkinson’s Disease is a brain disease where a small group of nerve cells in the substantia nigra of the brain die.  Diseases like this are called degenerative diseases and some examples are shown in the diagram above.  Stem cells allow the possibility of replacing the cells that have died with new cells derived the patient’s own stem cells.  The big advantage of doing this (as opposed to replacing the lost cells with transplanted cells from another person) is that there should be no chance of the immune system rejecting the transplanted cells.  If scientists could take some of the patient’s adult stem cells and treat them so they become specialised into new substantia nigra cells,  these cells could be added into to the brain and the symptoms of the disease may be overcome.  This offers a cure to some diseases that are currently very difficult to treat.

What are the disadvantages of using stem cells in medicine?

But…….  the main problem is this.  Adult stem cells (such as those found in the bone marrow) are multipotent.  This means that they can only develop into a small number of cell types.  To get pluripotent stem cells that can develop into almost all cell types, you need to get the stem cells from an embryo.  These stem cells are much more useful for doctors and usually comes from “spare” embryos produced in IVF treatment for infertile couples.  This leads to serious ethical implications as the early embryo of course cannot give informed consent to be used in this way!  There are also practical difficulties.  Stem cells have the potential to develop into tumours when put into the body and thus cause cancers.  They may also provide a way for dangerous pathogens to get into the body.   Embryonic stem cells may also be rejected by the patient’s own immune system and killed.

If you want to watch a summary video about stem cells, this is a good one in my opinion.