Variation within a population is a critical and required component for natural selection.  If you have understood all the work on DNA, chromosomes and Mendelian genetics, you should now have a good understanding of where the genetic causes of this variation comes from.  But remember that variation can also be caused by the environment.  Indeed all variations in reality come from an interplay between genetic and environmental factors.  Genes by themselves cannot cause variation as without the environment of a cell to produce the protein, genes alone cannot affect the phenotype.

Sexual reproduction is the key to genetic variation in a population.  Meiosis produces gametes that are haploid and genetically different from each other.  The gametes may have a different combination of randomly “shuffled” chromosomes.  Crossing over in meiosis also allows alleles that would not otherwise be combined in a gamete.  So there are massive genetic differences between one gamete and the next.  And then there is random fertilisation so that any one male gamete is equally likely to fuse with any female gamete.  Random fertilisation (of gametes that meiosis has made genetically different to each other) is the key to genetic variation in a population. 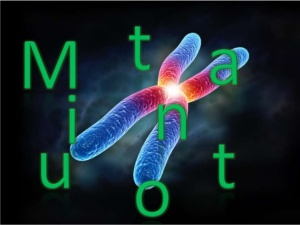 A final cause of genetic variation has nothing to do with sexual reproduction and is mutation.  DNA replication is not 100% accurate – the enzymes in eukaryotes make one error every billion base-pairs.  These mutations are random and can lead to new alleles appearing in a population.  Chromosomal mutations can also occur where chromosomes do not separate properly in meiosis or parts of a chromosome break off and re-join somewhere else….

Some of the differences seen in populations are due not to differences in genes but due to the differing environments in which an organism lives.  Peas which have inherited two copies of the T allele (for tallness) will never grow tall unless they are planted in well-watered soil and given access to sunlight.  You would never be a school teacher as a career without understanding that the environment a brain develops in can affect a person’s outcomes.  Environment is as important as genes in many variations in the human population, in particular to do with health and disease.  This is why so much emphasis for health for example is placed on promoting balanced diets, altering smoking habits, and moderating alcohol consumption.

Don’t allow yourself to fall into the lazy thinking of the “nature-nurture” debate.  It is lazy thinking because the debate is a nonsense.  Nothing is either determined by your genes or your environment – it is always both.  So when you read of a ‘gene for obesity’ or a ‘gene for domestic violence’ treat with extreme caution (and switch newspapers……)  If you read that playing violent computer games causes violent behaviour in humans, treat with caution.  None of these variations in a population will be just due to genes, none will be just do to the environment.  It will always be some complex interaction between the two.