Cloning is the process of producing many genetically identical organisms.  I am going to write two posts on cloning: this one on cloning plants and then later, a second post on cloning animals.  As this blog grows to cover the entire iGCSE specification, it does mean that I will have to blog on some of the less exciting (to me at least) topics in Biology.  Micropropagation of plants does not get to me in the same way as other topics, so I apolgise in advance if this post is rather dull……

Plants are relatively straightforward to clone, at least compared to animals.  Their bodies are made of fewer tissues and the genetic developmental program in plants is simple enough that many cells retain their totipotency into maturity.  The process of micropropagation, also known as tissue culture, is the main mechanism for cloning a plant.  Small samples from an adult plant are cut out.  These tiny explants can be sterilised in dilute bleach to kill surface bacteria and fungi, then grown in a suitable culture medium.  The explants divide by mitosis and grow but if the chemicals in the growth medium are correct, they will also start to differentiate into roots, shoots and leaves. 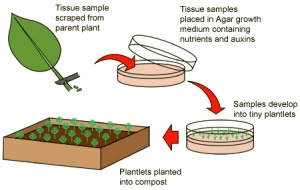 The experiment that you will have done on this in school involves cloning cauliflower plants.  A cauliflower can be divided up into many thousands of explants and these are cultured on Murashiga and Skoog growth medium.  This M&S medium contains the minerals, sugars and amino acids needed to grow but it also contains plant growth substances such as auxins and cytokinins.  These growth substances can switch on root and leaf development and so rather than just producing a larger ball of cells called a callus, the explants will develop roots and shoots so they can be planted into compost.  Seeing as the only cell division in this whole process is mitosis, the plantlets will all form a clone of the original parent plant.

In practice what tends to happen in these experiments is that the surface sterilisation does not work fully and so students end up growing a boiling tube full of bacteria and fungi.

Micropropagation does have commercial applications as it can produce large quantities of genetically identical plants.  This allows the plant breeder to produce plants all year round without needing pollinating insects.  The breeder can also guarantee the exact genetic make up of every plant as they are all a clone.  Sexual reproduction of course introduces genetic variation into the offspring and although this might be advantageous to plants in the wild, for a plant breeder it is unwelcome as many of the offspring may not grow as well or be as tasty to eat as their parent.  So if she starts with a plant with desirable features (good tasting fruit/disease resistance/easy to grow etc.) then every single plant in the clone will have the same desirable characteristics. Banana plants can be produced commercially by micropropagation.

If you find micropropagation interesting, you are a better biologist than me.  But I hope this post proves useful if not entertaining….