I have looked at osmoregulation in a previous post but in this final post for half term 2015, I will give a few details about thermoregulation.

Thermoregulation means to maintain the core body temperature at a set value.  This can be energetically very costly as the animal has to respire at a much higher rate to release the heat needed to warm the body, but it has allowed mammals and birds to colonise habitats that would be inaccessible to all poikilothermic (cold-blooded) animals.

All metabolic reactions in the body are catalysed by enzymes.  If the body temperature falls too low below the set value, the rate of an enzyme-controlled reaction will drop, and this would be a problem as metabolic reactions would happen too slowly.  If the temperate goes much above the optimum temperature, then the enzymes that catalyse all the reactions in cells would denature.  This means they will change their shape so that the “lock and key” mechanism of catalysis cannot work at all.

In any homeostatic control system there will be three components:

In human thermoregulation, there are two sets of sensors that measure temperature.  The skin contains hot and cold receptors which can respond if the skin gets too hot or cold respectively.  The temperature of the blood is constantly measured by a second set of thermoreceptors which are found in the hypothalamus in the brain. 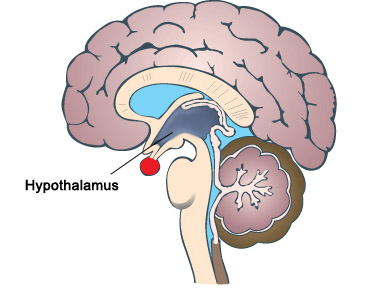 The hypothalamus also acts as the integrating centre, collecting information from a variety of sensors and then initiating an appropriate response.

The main effector organ in thermoregulation is the skin.

I have looked at the role of the skin in thermoregulation in an earlier post – click here to be taken to this….

Just check you understand the role of sweating, vasodilation in helping the body lose heat if it gets too hot and vasoconstriction and shivering if it gets to cold.  I hope the earlier post will help!

The main function of the kidneys is EXCRETION. They remove urea from the blood in a two stage process described in an earlier post, first by filtering the blood under high pressure in the glomerulus and then selectively reabsorbing the useful substances back into the blood as the filtrate passes along the nephron.

But the kidney has an equally important role in HOMEOSTASIS.   It actually is the main effector organ for regulating a whole load of variables about the composition of the blood (e.g. blood pH and salt balance) but in this post I want to explain to you how the water balance of the body is regulated and the kidney’s role in this homeostatic system.

Why do you need to regulate the dilution (or water potential) of the blood?

If the blood becomes too dilute, then water will enter all the body cells by osmosis (from a dilute to a more concentrated solution).  This net movement into cells would cause them to swell and eventually burst.  Bad news all round…

If the blood becomes too concentrated, then water will leave the body cells by osmosis.  Cells will shrivel up as they lose water into the blood and this will kill them.  Bad news all round….

The regulation of the water potential of the blood is a very important example of homeostasis in the human.  It is often referred to as OSMOREGULATION.

The water potential (dilution) of the blood is measured continuously by a group of neurones in a region of the brain called the hypothalamus.

The hypothalamus is found right next to a very important hormone-secreting gland called the pituitary gland, marked as the red circular structure on the diagram above.  When the hypothalamus detects that the blood’s water potential is dropping (i.e. it is getting too concentrated) this causes the posterior lobe of the pituitary gland to start secreting a hormone ADH into the bloodstream.

(You might remember that these brain structures appear elsewhere in the iGCSE specification.  The hypothalamus also contains the temperature receptors that measure the temperature of the blood in thermoregulation; the pituitary gland plays a role in the menstrual cycle by producing FSH and LH)

Hormones such as ADH exert their effects elsewhere in the body.  The main target tissue for ADH is the collecting duct walls in the kidney.  ADH binds to receptors on these cells and makes the wall of the collecting duct much more permeable to water.  This means as the urine passes down the collecting duct through the salty medulla of the kidney, lots of water can be reabsorbed into the blood by osmosis.  This leaves a small volume of very concentrated urine and water loss is minimised.

ADH is secreted whenever the body is dehydrated.  It might be because the person is losing plenty of water in sweating in which case it is vital that the kidney produces as small a volume of urine as is possible.

If you drink a litre of water, what effect will this have on the dilution of the blood:  of course it makes the blood more dilute.  This will be detected in the hypothalamus by osmoreceptors and they will cause the pituitary gland to stop secreting ADH into the bloodstream.  If there is no ADH in the blood, the walls of the collecting duct remain totally impermeable to water.  As the dilute urine passes down the collecting duct, no water can be reabsorbed into the blood by osmosis and so a large volume of dilute urine will be produced.

This is another beautiful example of negative feedback in homeostasis.

PMG tip:  you can avoid getting confused in the exam about the effect of ADH if you can remember what it stands for.  ADH is an acronym for anti-diuretic hormone (ADH).  A diuretic is a drug that promotes urine production.  They are banned drugs from WADA (World Anti-Doping Agency) since they can be taken as a masking drug to help flush out evidence of illegal drug taking.  Shane Warne missed the 2003 cricket World Cup and served a ban for failing a drugs test due to diuretics in his sample.

So an anti-diuretic hormone will reduce urine production.  This means it will be secreted when the body is dehydrated as the blood gets too concentrated.

Finally remember that it is not the whole nephron that is affected by ADH, just the collecting ducts and part of the distal convoluted tubules.  Most water in the glomerular filtrate is absorbed in the nephron but the collecting duct has a role in “fine-tuning” the volume and dilution of urine.

This is a really important topic to master for an A* in your exam.  Examiners seem to like asking questions on ADH and osmoregulation and often these questions are amongst the hardest marks to get in the exam, and so serve as a brilliant discriminator between A and A* candidates.  Work hard to master this topic and with a little luck from the question-setters an A* grade is within your grasp……

Homeostasis is one of the more difficult topics for students to understand in the iGCSE specification.  I have posted already about the skin and its role in thermoregulation so I suggest you read that post again to get the details….

In this post, I am going to try to explain the concept of homeostasis in much more general terms, then in later posts, look at the two examples mentioned in the syllabus.  Here goes….

A definition to learn:

Examples of Homeostasis in Humans

A whole variety of factors are maintained at constant values in the body by homeostasis.  For example (there are many more….):

This introduces the first area of common confusion in students’ exam answers.  For some reason many students think that homeostasis is a word for the maintenance of body temperature in humans.  I hope you can see it is a much more general term than that.

But…. the systems that maintain a constant body temperature in endothermic animals are one example of homeostasis.  In fact this example (thermoregulation) is one of the two from the list above that you need to understand for your exam.  The other one you might be asked about is osmoregulation (the maintenance of a constant dilution of the blood).

All homeostatic control systems have some common features.  The variable that is going to be regulated needs to be measured somewhere in the body.  A change in this variable is called a stimulus and is measured by a cell called a receptor.  The measured value needs to be compared with a “set value” and this is done by an integrating centre that then controls an effector.  The effector is an organ that can bring about a response.  But what kind of response do you want in the process of negative feedback?

A common process involved in homeostasis is negative feedback.  This is quite tricky to define but in fact it is a really simple idea…….  If you want things to stay the same, any change must be corrected. That’s negative feedback in a nutshell.

For example a school might want students walking round the campus at a sensible speed:  not to fast to knock people over, not to slow or people are late for lessons…  Imagine a particular group of children who start to run around the place, causing mayhem and injuries to fellow students.  Well this will first be detected by the system.  There may be a particular teacher who comes out and sees the students running, the school nurse might report an increase in cuts and bruises.  However it happens, a change in the system (a stimulus) is detected.  There will be an integrating centre in this control system too, probably in the form of a stern deputy head.  She will compare the measured speed to her own “set value” of how fast students should move.  And she will initiate a response:  probably a loud telling off to the entire school in assembly, lots of dire warnings about future conduct and an after school detention for all the rule breakers.  The net response of this will be that students will start moving slower around the school….  Eventually of course people will start moving too slowly and will be late for lessons.  How do you think the system will react to this new stimulus?  This process where the response tends to reduce the stimulus is called negative feedback.

To give you a biological example in thermoregulation, look at the diagram below:

Both examples of negative feedback!