Mutations are changes in the DNA content of a cell.  There are various ways the DNA of a cell could change and so mutations tend to be grouped into two main categories:  chromosomal mutations and gene mutations. 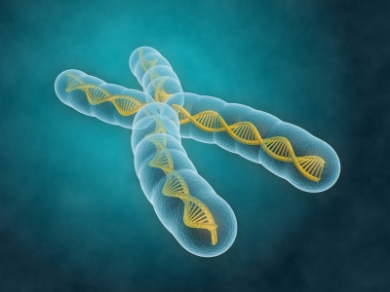 This is a change in the number or length/arrangement of the chromosomes in the nucleus.  For example, people with Down’s syndrome have an extra copy of chromosome 21 giving them three chromosome 21s as opposed to the normal two.

(How many chromosomes in total will a person with Down’s syndrome have in each cell?)

Chromosomal mutations are often found in tumour cells and so play a critical role in the development of various cancers.

Sometimes the number of chromosomes in a cell stays the same, but sections are deleted, duplicated or break off from one chromosome to attach elsewhere.  If this happens, this too would be classed as a chromosomal mutation. 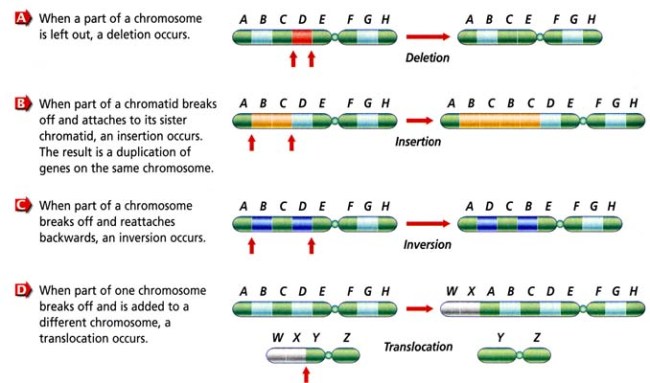 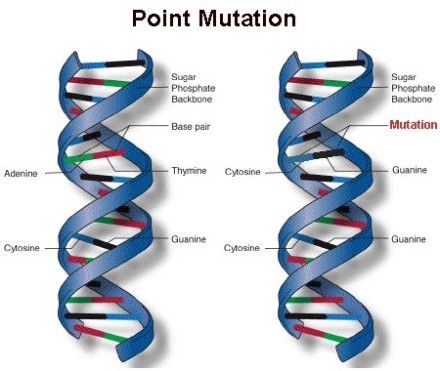 A point mutation is a change to just one base within the gene – it occurs at a single point on the DNA molecule.

Mutations can happen at any time and occur randomly whenever the DNA is replicated.  But there are certain things that can increase the rate of mutation and so make harmful mutations more likely.  A mutagen is an agent that increases the chance of a mutation occurring.

a) Radiation can act as a mutagen

Some parts of the electromagnetic spectrum can cause mutations when they hit DNA molecules or chromosomes.  This is called ionising radiation and includes gamma rays, X rays and ultraviolet.  You probably know that the dentist goes out of the room whenever they take an X ray to protect themselves from repeated exposure to X rays and you all certainly know of the link between UV exposure and incidence of skin cancer.

b) There are chemical mutagens as well

Some chemicals can make the rate of mutation increase.  These are called chemical mutagens and a good example is the tar in tobacco smoke.  Tar can cause cancers to form wherever the cigarette smoke comes into contact with cells and this is because tar is a mutagen.  It makes mutations in the DNA much more likely and mutations are needed to turn a healthy cell into a cancer cell.