In the topic of sexual reproduction in plants, the final stage is often overlooked.  I think it is helpful for students to think of this topic in several distinct stages.

Once the seed has been dispersed there then follows a period of dormancy when nothing happens.  In latitudes such as the UK this often is there to delay germination until the following spring when growing conditions become more favourable.  The process of taking an inert seed and growing a new plant from it is called germination.

You don’t need to worry too much about the details of germination but there are a few vital parts of the process that GCSE candidates need to appreciate for A* marks.  Firstly you should know the structure of a typical seed. 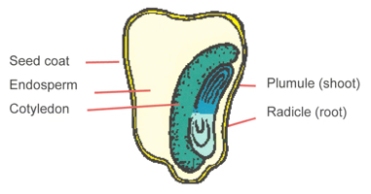 The seed coat or testa surrounds the seed and provides a tough waterproof container.  Inside there are the embryonic plant (composed of a plumule and radicle), one or two seed leaves called cotyledons and a storage tissue called endosperm.

Germination starts when the seed starts to take up water by osmosis.  There is an opening in the testa called the micropyle that allows water to move into the seed causing it to swell and thus rupture the seed coat to allow the embryo plant to emerge.

Water entering the seed also activates the embryo plant such that it starts to release digestive enzymes such as amylase.  Amylase catalyses the digestion of starch into a simple sugar maltose.  The endosperm and cotyledons contain energy stores in the form of starch, lipids and proteins and as these get broken down by the various enzymes, they provide the energy for the early growth of the seedling.  The radicle emerges first and grows downwards (positive geotropism) and then the plumule or shoot grows upwards towards light (positive phototropism).  Remember that throughout the early stages of this growth the energy required comes from stored food molecules in the seed.  If you measure the mass of the plant during this phase, it would be decreasing.  Only when the first leaves emerge above ground and the plant can start the process of photosynthesis will the overall mass start to increase.