Having spent the last day or two writing material about one of the hardest topics in the IGCSE Biology specification (DNA and Protein Synthesis), I am going to write today about something much simpler.  You need to understand how the sex of a human is determined at the moment of fertilisation.  But this is a topic which can confuse students so I am going to try to explain it for you as best I can.

The sex of a human (whether male or female) is determined by the 23rd pair of chromosomes.  Please remember that just because humans determine their sex this way, this doesn’t mean that other species have to be the same.  In fact other species use a variety of ways to ensure the correct proportion of male and offspring are born. 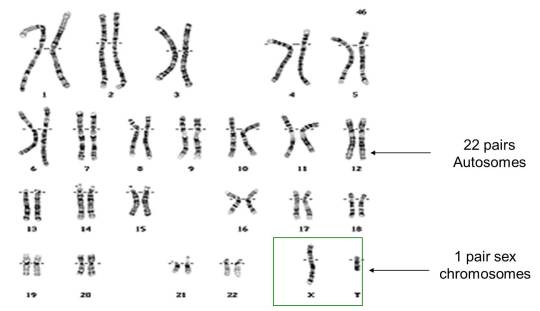 So a human female has XX as her 23rd pair of chromosomes, a human male has XY as his 23rd pair.

Gametes (Sperm and Egg cells) are made in a process called Meiosis.  Remember that meiosis produces daughter cells that are haploid (this means they only have one member of each pair of chromosomes and so half the genetic material)